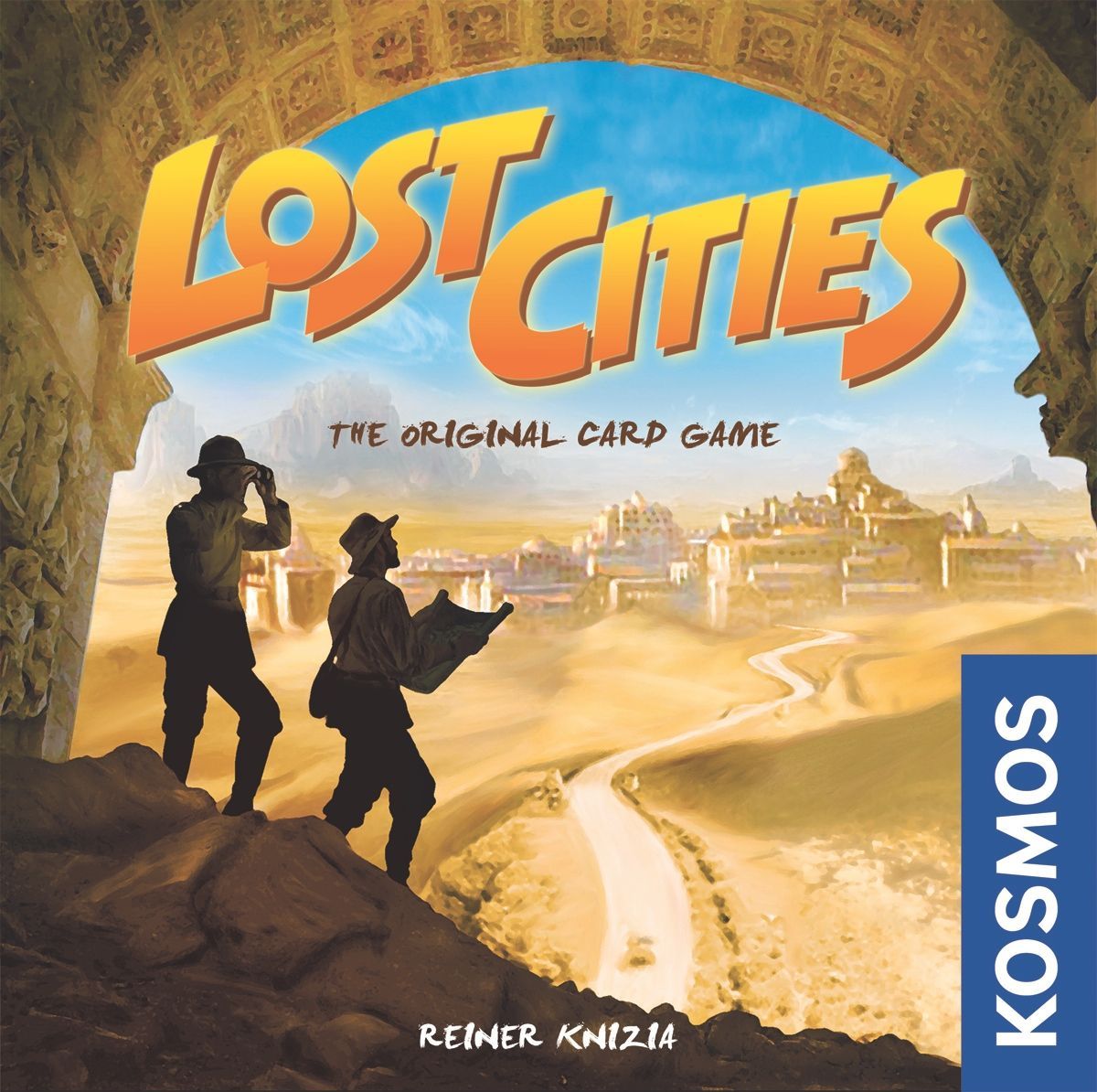 Lost Cities is a card game in the Kosmos two-player series. The game consists of a single deck of cards of rank 2–10 in 5 different colors with 3 special "handshakes" ("HS" in scoring examples below) in each suit. There is also a board which functions only to hold and organize discarded cards and is largely superfluous. Games last around 15 minutes. This is generally considered a good "couples" game and is often recommended for people with non-gamer partners. The object the game is to gain points by mounting profitable archaeological expeditions to the different sites represented by the 5 colors. On a player's turn they must always first play one card, either to an expedition or by discarding it to the appropriate discard pile, and then draw one card. There is a separate discard pile for each color and a player may draw the top card of any discard pile or the top card of the deck. Cards played to expeditions must be in ascending order but they need not be consecutive. Handshakes are considered lower than a 2 and represent investments in an expedition. Thus, if you play a red 4, you may play any other red card higher than a 4 on a future turn but may no longer play a handshake, the 2, or the 3. The game continues in this fashion with players alternating turns until the final card is taken from the draw pile. The rest of the cards in hand are then discarded and players score their expeditions. Each expedition that has at least one card played into it must be scored. Cards played into an expedition are worth their rank in points, and handshakes count as a multiplier against your final total. Expeditions start at a value of -20 so you must play at least 20 points of cards into an expedition in order to make a profit. If you are left with a negative value and have a handshake, the multiplier still applies. A 20-point bonus is awarded to every expedition with at least 8 cards played into it. The player with the most points wins the game, but it is typical to play 3 matches and add your score from each to see who wins. Scoring example 1: an expedition has a 2,3,7,8,10 for a total of 30. This expedition is worth 10 total points: 30 minus the initial -20. Scoring example 2: an expedition has 2 HS, and 4,5,6,7,8,10 for a total of 40. This expedition is worth 80 total points: 40 points for cards, minus the initial 20, ×3 for the 2 multipliers, plus the 20-pt bonus for playing 8+ cards. Scoring example 3: an expedition has 1 HS, and 4,6,7 for a total of 17. This expedition is worth -6 total points: 17 minus initial 20, ×2 for the multiplier.