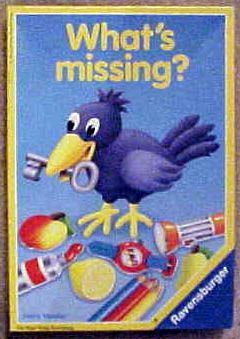 What's Missing? is both the name of the game and what players are trying to figure out. To set up the game, players lay out on the table the forty objects (four each of ten different objects) in the box, and each player takes four raven tokens. While all the other players close their eyes, the active player for the round removes one object from play, hiding it in her hands under the table, for example. All of the other players then search the table to try to decipher what's missing, yelling out the answer as soon as they think they know. If correct, that player places a raven token in the box; if not, the player receives another raven token, but can continue to play that round and guess again. Whoever runs out of raven tokens first wins! A variant for younger players reduces the number of objects on the table to thirty, that is, three of each object instead of four.