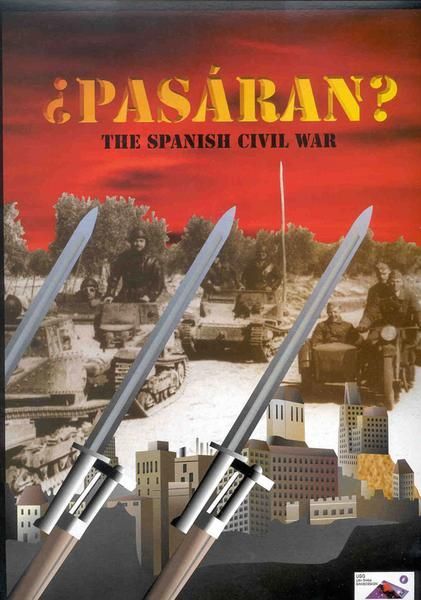 ¿Pasarán? - The Spanish Civil War. This is a stand alone game using the 'Blitzkrieg General' game system for the years 1936~1939. There are also 'New' counters and cards for the 'B.G.' game included, as well as some more for their 'Empires of the Apocalypse' game, namely 5-Jet Fighters for England, U.S.S.R., U.S.A., & Japan. The contents consist of the following: 280-Full COLOR die-cut cardboard counters; 1-Full COLOR Map sheet; 1-Quick start Card; 1-RULES Booklet; 1-Tutorial Booklet with a Special 'CARDS' Appendix; 2-Scenario Cards; 1-Battle chart; 2-[6]-sided DICE; 55-Cards; & a cardboard storage Box. There are Special Rules for Terrain, Weather, Supply, Fascist 'Volunteers', the International Brigades, the Soviet's 'donations', as well as a Command system unique to this subject of the 'Spanish Republic vs Franco- Nationalist' struggle. The unusual title is derived from the famous slogan-"¡No Pasarán!" which became the battle-cry of the Republican forces. This can also be used with the 'B.G.' game and some of the 'New' counters for that include: Marines, Mountain Units, Paratroopers, & Artillery. The entire component's graphics are expertly produced and depict the many and varied forces involved in this epic prequel to World War 2.