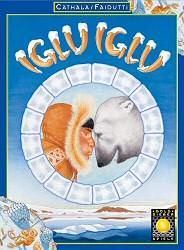 At first the board is a field of ice with four squares in the middle cracked open to reveal a few fish. You start your turn by picking up one more square of ice next to some water already open; this square will turn out to have more fish, or a polar bear, or to be hard ice instead of water and have a fox on it -- or instead it may confer a special power such as melting an extra square of ice or pushing a row of ice squares one space. Meanwhile the players' Inuit meeples approach from the edge of the board to hunt the fish and the other animals to score points and to build igloos for territorial reasons. The game ends when there's no more ice to be melted (all the squares next to open water have an Inuk or an igloo on them), prompting a final scoring based on which players have control of the remaining islands. Even in the "gamers' version" (Inuit cannot enter a square with an opposing igloo, scoring is a little different at the end) noted by the authors, the tiles you draw determine, to a large extent, your luck in the game. But your cleverness in scrambling to make the best of opportunities keeps Iglu Iglu interesting.