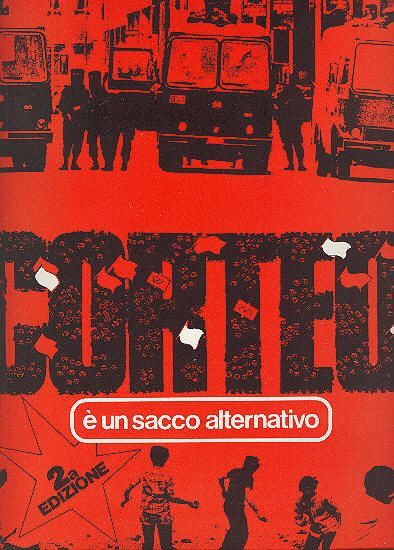 Corteo is a simulation of a demonstration in a city. A huge mass of people goes across it trying to occupy the most important spots: from embassies to the TV Station, from the government palace to the court, from the prison to the most fashionable shops. Counters have traditional movement and combat scores. The Demonstration player has a lot of slow units plus some quicker and deadlier ones (from anarchists to marxist-leninists); the Power player has policemen and "Carabinieri" with heavy vehicles (some of them shooting gas) plus a few lousy city council policemen. The huge city is finely depicted (graphics by Piergiorgio Maoloni, that later became one of the best well-known art directors of Italian newspapers and magazines) and it has funny names on streets and squares. A hex grid is of course impressed on it to rule movement and combat. A humorous "Yellow Pages" booklet is included to help finding the best places to score points around. There are several scenarios, including a totally different "Black Out" scenario inspired by a New York black-out: up to 6 players go around sacking the city, while up to two players try to stop them with policemen and Carabinieri. Those two can fight each other to get the goods they seized to the pillagers, but only if it is a "dark" turn so they can pretend not to recognize each other. This is the first boardgame published by C.UnS.A. when they were still "Comitato Un Sacco Alternativo", before becoming a company and a successful team of game designer (for boardgames, radio and TV games, advertising games, training games, magazine games and so on). At that time, C.UnS.A. was composed by Massimo Casa, Giulio De Petra, Alvaro Lojacono, Piergiorgio Maoloni and Sergio Zoffoli. In 1980 Mondadori Giochi made a second edition with a heavier map and counters, but without the "Black Out" variant: there was rumor that it could become a separate game, but this never happened.