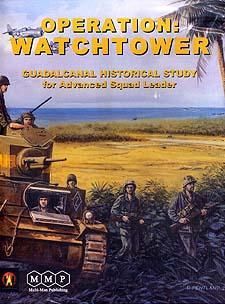 (from MMP website:) August 21, 1942...Colonel Ichiki's men were practically wiped out the night before in wave after wave of banzai attacks across the Tenaru into the well-prepared Marine defenses. Canister, machine-gun fire, and courage had broken Ichiki's back. As dawn rose above the sand bar it was time for the Marines to mop up... September 13, 1942...The Japanese under Colonel Kawaguchi were pressing hard to take the Lunga Ridge from Edson's Raiders. The Marines bent, but had not yet broken, and were making a last stand on the final defensive obstacle between the Japanese and Henderson Field. Outnumbered, the Raiders had but one advantage - artillery. As shell after shell slammed into the Japanese staging areas, they elect to attack and fight rather than die staging for an assault. With a fateful "BANZAI!" they charge up the hill one more time... September 27, 1942...The Marines, anxious to take the fight to the Japanese, mount an ambitious plan to surround and destroy the majority of the Japanese forces at the moutn of the Matanikau River. A three-pronged attack, each prong depending on the others succeeding, was devised. When the first attack to take the river crossing points failed, messages to cancel the remainder of the offensive were never received and the remaining elements of the offensive soon went from the hunters to the hunted. Could Marine Corps legend Chesty Puller extract his men from this sticky situation... December 25, 1942...Army troops, having taken over for most of the Marine formations, were eager to prove their mettle on the assault. Their first task on the long list of objectives required to clear the island was a strongpoint called the Gifu. This particularly nasty position of pillboxes and machine-guns would prove to be a tough nut to crack, however... History. That's why many gamers enjoy ASL-its ability to simulate a historical battle. Yet how can you study and entire campaign while still enjoying your favorite tactical game? This package addresses that need. A Historical Study will touch upon all aspects of a campaign either by incorporating part of it into a campaign game or by presenting a representative scenario to help enlighten the player as to why particular choices may have been made. All while enjoying the world's best squad-level tactical game. Operation: Watchtower is the first of the Historical Studies, which is appropriate since Guadalcanal was the first American offensive in the Pacific. Hopefully, once a player has played through the sixteen scenarios within, they'll better understand the campaign and its outcome. Contents: 1 42x30 Historical Map 1 Countersheet of 1/2" counters 16 scenarios on cardstock Chapter Z Additions for the Edson's Ridge mini-HASL 1 Historical Writeup of the campaign Time Scale: 2 minutes per Game Turn Unit Scale: 5 to 10 men, plus individual leaders, vehicles, guns Map Scale 40 meters per hex Players: 2 (also suitable for solitaire or team play) Playing Time: Varies with scenario played; on average, two hours Complexity: High Solitaire Suitability: Medium