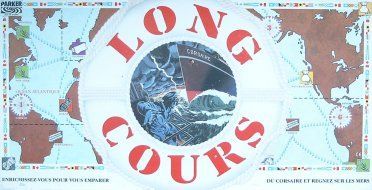 The board is a map of the world divided into 6 areas each having 4 harbours. Each player owns a ship. The game proceeds in two phases. In the first phase the object is to trade and acquire wealth as quickly as possible. To that purpose, each player sails from harbour to harbour: in a harbour a commodity can be bought [wheat - gold - wood - cloth - wool - fruit] – in some harbours no goods can be bought. Sailing can be short distance – form harbour to harbour which are connected by dotted lines or long distance using a “Long Course” card. Selling goods can take place in any harbour – player rolls the dice which determines which good can be sold – always at three times the cost. Using a “Storm” card a player can organise a storm in one of the six areas forcing the ships in that area to leave behind their goods in the harbour – available for the next ship that visits the harbour. The ships will return again using the dice as this determines to which area the ship will return – player can choose the harbour. When 2 ships are going to the same harbour the 2 captains need to fight each other using “Squabble” cards damaging the opponent more and more [pretty funny descriptions]. The loser of the fight looses his money. However, cards played do NOT return so there’s limited supply. And you will definitely need some of these later in the game. The second phase starts as soon as a player is rich enough to acquire the corsair ship – the corsair ship is auctioned with a minimum cost. The player will then try to eliminate all of his or her adversaries. The dice decides in which area the Corsair ship starts. On the turn of the player “owning” the Corsair ship he can sail 3 steps – as opposed to the other players who can only sail to the next harbour. The “Long Course” cards are very valuable now. When the Corsair ship catches a player’s ship that’s the end of it: goods return to the bank and the owner of the Corsair gets the money. The Corsair ship has done its job and returns to the bank – available for another player to buy it. The Corsair ship is sensitive to the “Storm” cards and will sink. The winner is the one remaining player. The rules are simple, but the characters are limited in what he/she can do each turn. Also all eliminated players have to wait until there’s a winner and are no longer participating in the game.