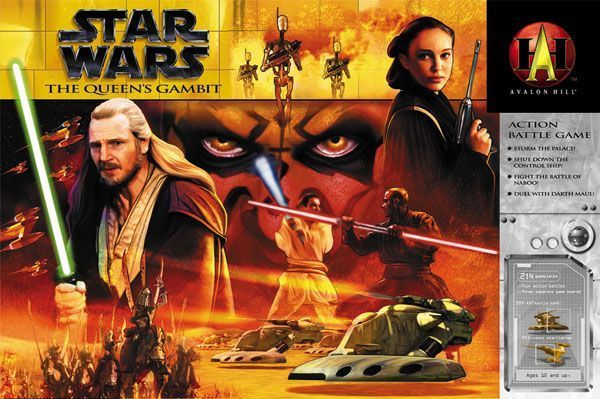 Based on the four battles at the end of Star Wars Episode One: The Phantom Menace -- the battle on the plain between the Gungan forces and the droid army; the attempt by Naboo forces, led by Queen Amidala, to storm the palace and capture the Trade Federation viceroys; the fight between Darth Maul and the two Jedi Knights; and the space battle in which Anakin's starfighter destroyed the Droid Control Ship. The forces are represented by 155 plastic miniatures on three separate boards, including a three-level palace. The action is driven by two decks of cards for each side. Each turn, each side simultaneously chooses four action cards from a hand of ten, and places them in order. The actions are then carried out one at a time, alternating sides. Combat is resolved using special attack and defense dice.