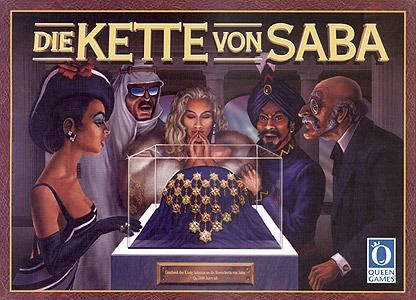 extrapolated from session report: The theme of the game is based on the legendary necklace of Saba, which went to the grave with its owner upon her death. Sadly, dastardly grave robbers plundered the tomb and the valuable gems which comprised the necklace were scattered across the globe. Now, a wealthy sheik is anxious to reassemble the necklace and present it as a gift to his lovely bride. Players are charged with the task of assisting the sheik, attempting to purchase the many gems at auction and then reassemble the necklace in the proper fashion. The board depicts the frame of the necklace, with space for its 36 missing gems. In total, there are 44 gems in the deck, many of which will ultimately prove to be forgeries. Depending upon the number of players, each player receives from 3 - 7 gems to begin the game, along with $20,000. Four gems are revealed from the remainder of the deck and positioned into the frame. The game is played in two major phases. During the first phase, players alternate placing a gem up for auction, ala Modern Art. The auctioneer receives the funds from the high bidder, who receives the gem. The winner has the option of keeping the gem, or placing it into the frame. If placed in the frame, the gem earns $2,000 for other gems it touches and those radiating from it in straight lines, including itself. During phase 2, the reward is reduced to only $1,000 per gem. Following an auction, the auctioneer has the opportunity to purchase another gem from the deck for $2,000. Phase 1 ends when the gem deck expires. Phase 2 then begins with players reconstructing the necklace. In turn, each player places a gem into the frame and earns funds as described above. The twist in the game are the rules which must be followed in reconstructing the necklace. The main rules are: The necklace must be symmetrical, with left and right halves containing the same jewels in the same places. All cards appear twice in the game, so what appears on the left side must appear in the same position on the right side. The only exception to this is the center column. Any duplicate pieces are considered forgeries and are worthless. Pieces of jewelry containing the same type of gem must be placed in uniform columns. Thus, the first gem placed in a column dictates what kind of gem must appear in that same column. The number of gems on a card can only be one greater than the number of gems on the cards directly above it. Once the first gem is placed in a column, it 'locks' that column AND the corresponding symmetrical column. Only gems which meet the above rules can subsequently be placed there. The game ends once the necklace is completed. The player with the most money is victorious.