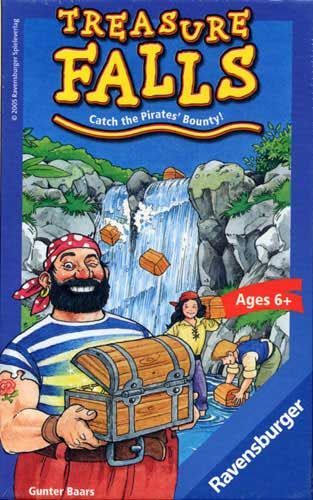 One of the games in the series of "Mitbringspiele" (pocket games). A ship loaded with treasures has capsized in the river and several treasure crates float around. The problem is that there's a waterfall nearby and the crates are getting closer and closer to it. The treasures are represented by several, differently coloured wooden blocks set up on differently sized blue water-chips. You must carefully push them back, because if you fail and the crate falls down, your fellow players get the victory point. The players are river pirates waiting at the foot of a waterfall (represented by a plastic ramp in connection with the game box) for the treasures of a capsized treasure ship. In her/his turn the player rolls a die to see if and how many water-chips she/he has to add at the far end of the ramp. Than the player must push the newly set water-chips up the river/ramp with a tree trunk for a given length. So every turn some water-chips are dropping off the ramp - that's the waterfall. When treasure blocks are on the water-chips they are dropping with them down the waterfall and the player, whose turn it was before the active player's receives the treasures. Ages 5 and up