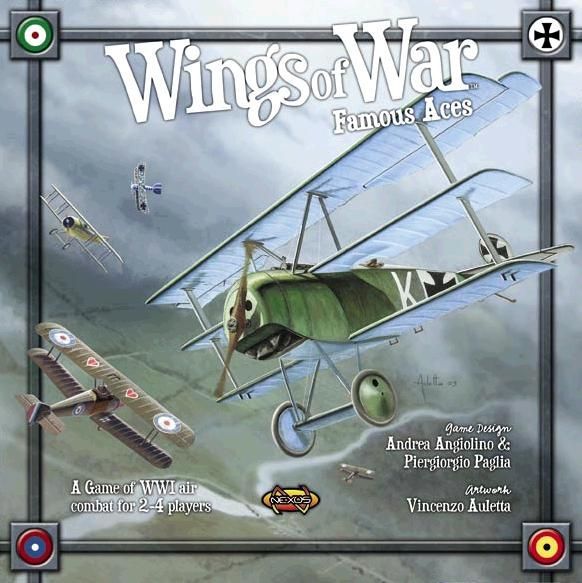 Wings of War is a game series which merges card and board game mechanics to recreate aerial combat. The first series of Wings of War games focus on the "knights of the air" age, World War I, portraying the abilities of the fighting planes of this period. Airplanes are represented by a single card which is used as a playing piece on any open surface; the players choose and play simultaneously movement cards to decide the actions of the airplane they control. Different planes use different decks of movement cards to represent their different maneuver capabilities, and different deck of "Fire" card are used to take into account their fighting effectiveness and to keep track of damage. Each Wings of War set is a complete game for 2 to 4 players which may be combined with additional sets, or with other copies of the same set, to play larger games. For that purpose, 23 planes with different colors are included in each box. Each one is depicted after accurate historical documentation. Wings of War: Famous Aces is the first set of the WWI collection. It includes 5 types of planes: the Spad XIII, Albatros D Va, Sopwith Camel, Fokker Dr1, Sopwith Triplane. Each one was flown by an ace: between them Baracca, von Richtofen, Rickenbacker, Fonck, Olieslagers, Bakers. There are also 4 decks of movement cards, 1 deck of combat cards, rulers, counters and a promo card of the second set, Wings of War: Watch Your Back!, depicting an Austrian two-seater Ufag C.I.