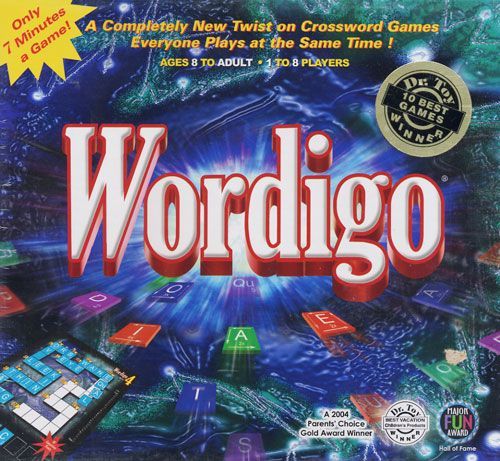 From the publisher: The Best of Quick Thinking, Strategic Play and Fun in One Great Game! What makes Wordigo special? Simultaneous Play In Wordigo, everyone plays at the same time. No waiting for other players to complete their turns. Each player gets his/her own playing board and own set of letter tiles – 4 sets of each. Players race against the clock and other players to complete all the paths on his/her own board before time runs out. Versatility Not only are there 4 copies of the same playing board, there are 4 different game board designs offering varying degrees of difficulty. Plus, by making use of the alternative rules of play, children can easily play with adults. Highly Strategic Wordigo’s vowels, with their arrows and bonus markings of 2x, 3x, 4x and 5x, allow for a highly strategic, creative and unique way of scoring word points (see Demo). Solo & Team Play Wordigo is also unique in that a person can easily play challenging solitaire matches. With multiple players, team play is great fun as players compete against other teams to form words and attempt to complete all the paths before time runs out.