All Quiet on the Western Front - Universal Statistics 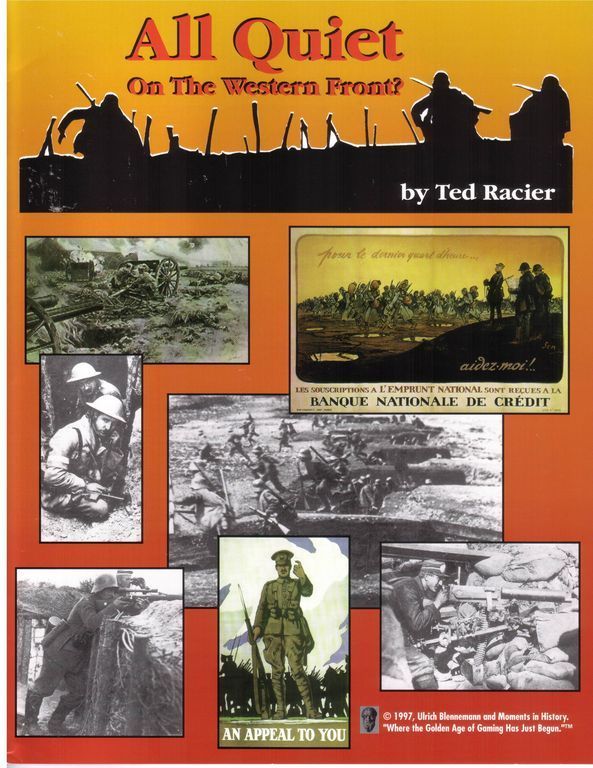 In early 1918, the trench warfare stalemate between the Germans and Allies was on the verge of ending. New small unit tactics developed by the Germans, and the advent of the Royal Tank Corps for the Allies, promised a new set of doctrines that would rule warfare for decades. The question was: who would beat whom to the punch? The Germans were fresh from a decisive military victory in the East against Tsarist Russia. The Allies were celebrating the arrival of fresh U.S. troops. Either side could claim victory if it could break the national will of the other. All Quiet on the Western Front is another Ted Raicer design focusing on this often neglected war. For many years, wargame designers shunned World War I for a variety of reasons: too dull, too static, too hard to reproduce the suicidal wave attacks waged by both sides. Ted Raicer almost single-handedly put WWI back on the wargaming map with a number of designs, including Paths of Glory, Clash of Giants, and "All Quiet...". A traditional hex wargame, "All Quiet..." elegantly tackles a number of the key issues that help determine the outcome of the war, including German Stosstruppen and national morale, as well as more traditional elements like supply and command/control. The game includes four scenarios: "Operation Michael" (an Introductory Scenario), "Ludendorff Attacks", "Allied Counteroffensive", and finally, the 30-hour campaign game, "1918".