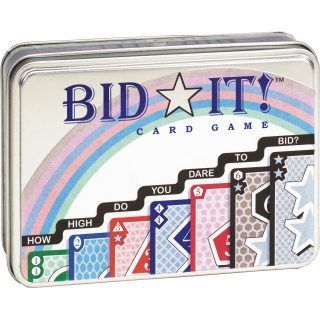 "Bid-It! is the bidding game where your hand doesn’t really matter, as long as you know how to bid it! The object of Bid-It! is to bid how many of a given number appear on the cards held by all players together. For instance, a bid of “four 5’s” means the bidder believes that there are at least four fives being held by all players as a group. The next player must either make a higher bid or challenge the previous bid. Once a bid is challenged, the cards are revealed. If the bid was too high, the bidder loses a card. If not, the challenger loses a card. Players try to figure out each other’s hands by their bids, but remember, bluffing is not only legal, it’s sometimes quite effective (unless you get challenged!) If you’re very sure that your opponent’s bid was too high, why not bid “double” and put the loss of 2 cards on the line? Of course, the bidder may turn the tables on you and “redouble”. Or if you think that your opponent’s bid was exactly right, take a chance and bid “Perfecto!” Includes 110 cards and instructions in a colorful metal tin. Inspired by Liar's Dice