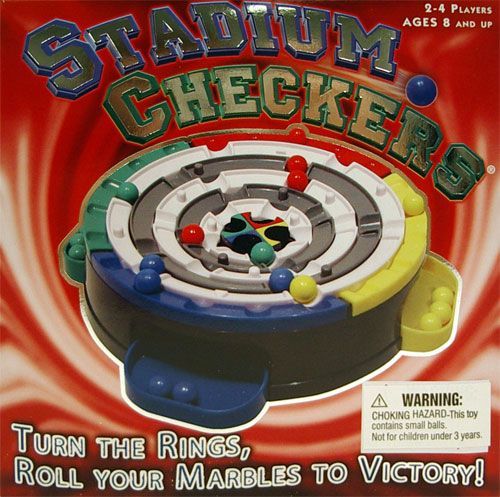 The 1952 game Stadium Checkers was the most complex and the liveliest version of this gravity-based, logic-puzzle race game. A special concentric 'stadium' is required, along with 5 marbles or balls beginning at the start quadrants on the stadium's uppermost and outermost ring. The earliest version of the game had 7 internal stepped rings, while later versions changed the rules and subtracted rings to simplify and slow down the game. A player designates a particular marble to be moved around into a particular slot, OR a particular slot to be moved over to a specific marble of their color, and as they slide the ring or marble as described, other marbles may fall down into lower slots before the slide is completed. According to Winning Moves Games (2007), the objective of Stadium Checkers (formerly marketed as Roller Bowl) is to get your marbles to the center of the stadium at their matching colored quadrant hole by selecting and moving a single ring and sliding it in a selected direction until a marble falls into a vacant slot due to the force of gravity. A single marble falling into a slot terminates the movement for the turn. Marbles falling into incorrectly colored holes are re-introduced at the rim of the stadium by the player of the corresponding color as the marble. This game is usually called Stadium Checkers or Intrigue. The reduction in the number of rings seriously affected the strategic complexity of the game in redesign, and reducing its overall size made it more likely that mishaps with the smaller, plastic balls might occur and cause illegal moves. Variants: restricting ring selection to that in contact with one's marbles makes the game more strategically challenging, and designating the ring-mover as the re-introducer of incorrectly finishing marbles, rather than their owning player, would complicate re-entry and reward key ring movement.