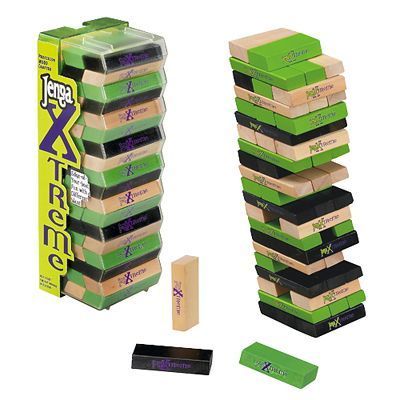 Similar to its older brother Jenga (1986), Jenga Xtreme (JX) is a block-stacking game where players pull wooden blocks from an 18-story tower and pile them up on top as high as the tower will go before collapsing. The new neon-green-and-purple JX has blocks with slanted sides, allowing the players to construct towers that lean precariously to one side without toppling due to the weight distribution that the new blocks allow. The game can be played as a competitive exercise where each player tries placing his block in a position so that the next player's block will make the tower fall over. Alternatively, it can be a cooperative exercise where the players try to make the tower go as high as possible without collapsing.