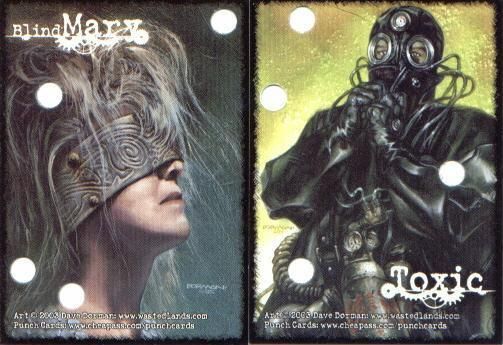 This is a game of luck using cards with pretty pictures on one side, rules and numbers on the other, and four holes punched through the cards. Players secretly select one of their card corners and the cards are held back to back with numbers showing through the holes. The value of each card is determined by the lowest number showing through one of its holes; the highest-valued wins. Ties use the next lowest number, etc. This is the 'quick play' game. The more complex game involves each player selecting five different cards (the two players could each use the same card, but no player may play with duplicates). Players select cards secretly and compare them as in the quick play game. The losing card is withdrawn (to be replaced by a new card in the next round) and the winner scores the value difference. Quick plays continue until one player runs out of card or concedes and the winner is determined according to accumulated score. Additional rules exist for using the cards as a convention-wide game in which players attempt to accumulate cards originally belonging to as many players as possible through trading and quick play victories. (See the web site if you want to run this at a convention.) The initial set of 20 Punch Cards uses artwork from Dave Dorman's Wasted Lands series.