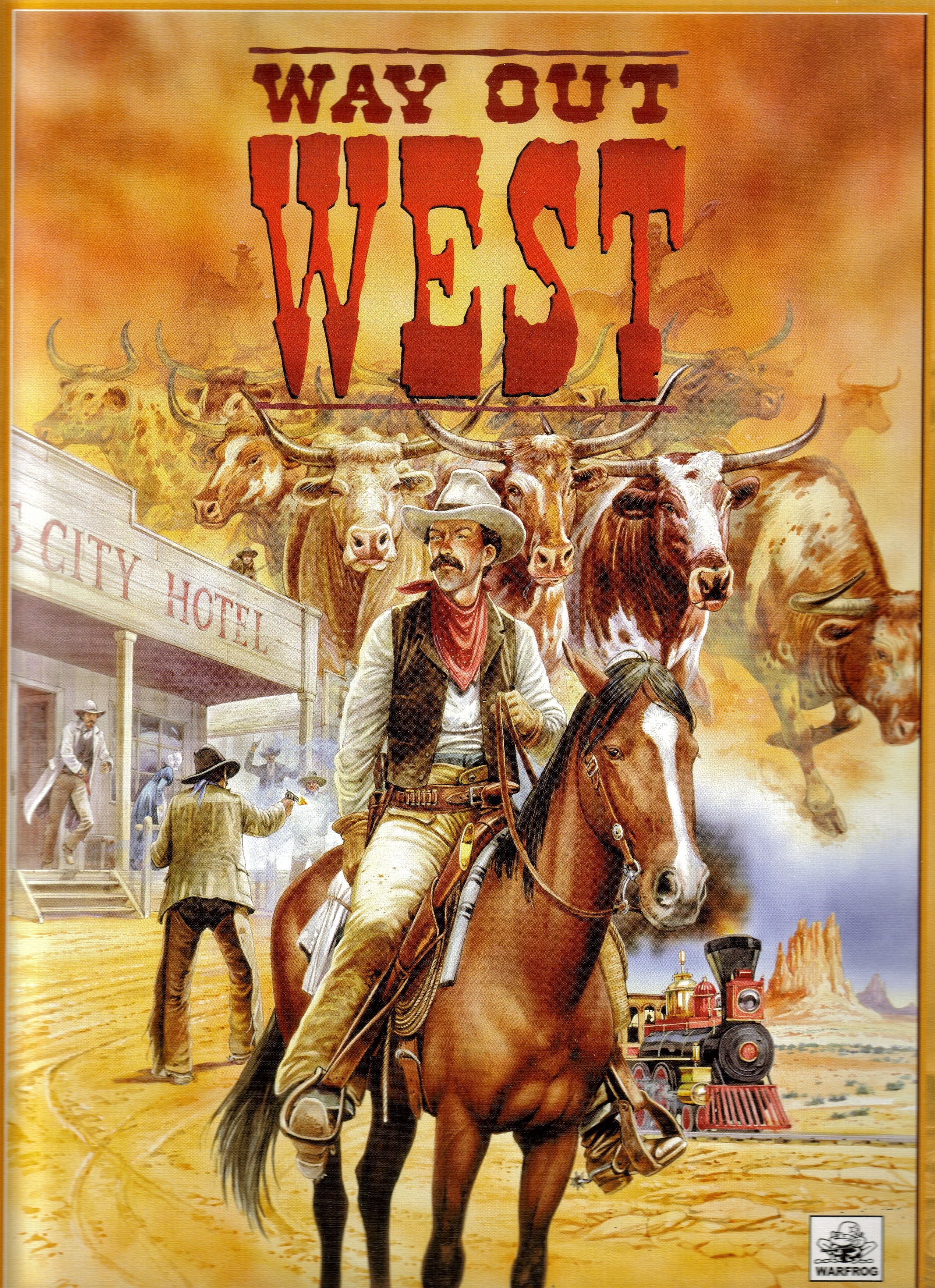 In this western themed game, players are looking to drive cattle across the west, establishing towns. If you don't like the way something is going, you can fight other players for control with your cowboys. You can rob the bank, rustle cattle, and shoot those pesky farmers! Gameplay: To Start each player receives a set of colored player counters, matching turn order token, and two black action tokens and either $20 or $25 depending on number of players. The dice are rolled to determine the start player. Each player in turn order will place one of their cowboy counters in a town box of any of the 5 towns on the map until each player has placed 3 cowboys. Each turn the players will bid for turn order, take actions and move the turn marker one space. To bid for turn order each player places an amount of money under their turn order token in current player order. Players may either raise or drop out. If a player drops out all money bid so far is paid to the bank and their turn order token is placed in the furthest available spot from start player space on the turn order track. This continues until one player remains and becomes the start player for the round. During the action phase each player will take 1 action in turn order. After everyone has taken a turn they repeat the procedure. The actions available are limited in number so turn order is important in doing what a player wishes to do. Actions available are: Buy Cattle in a town containing their cowboy(s), Purchase more Cowboys, Move Cowboys to different towns, Move Cattle from one town to another, Purchase Buildings or Transport counters in a town, Take a Farmer(reduces income and victory points from Cattle in the town they are placed), or Gunfight. There are six different building and transport counters: StageCoach (these earn $1 per cowboy when cowboys are placed in or moved from the town containing the player's StageCoach), Train (this doubles the income gained from all players Cattle in the same town and doubles victory points gained from Cattle at game end), Bank (earns its owner $2 for each building or transport counter in the same town), Store (earns the owner $1 for each Cattle counter belonging to other players in the town and $2 per Farmer counter in town), Hotel (earns $1 for each cowboy belonging to other players in same town), Jail (the sheriff in the Jail acts as an extra cowboy controlled by owner that can be added to Gunfights). Cattle and Farmers also earn money for players during an income round. Each Cattle counter earns its owner $2 UNLESS the town also contains a Farmer (it only earns $1 if this is the case). Oh, the Farmer and Cowmen can't be friends. Gunfights can be started to take over another players Building or Tranport counter, rustle Cattle, rob a Bank or remove a Farmer or Jail. The player choosing the Gunfight selects the target of the attack. All Cowboys belonging to each player in the town will be involved. The remaining player's Cowboys in the town are not involved. However; the owner of the Jail can choose to help themselves, if they are attacking, or they can add the Sheriff to the defender if wished. Farmers that are attacked defend as a single cowboy. Banks and Trains both have an intrinsic 1 Cowboy defense in addition to those in town of owner's color. The player with the fewest Cowboys fires first and immediately removes casualties. Each 5 or 6 rolled kills a Cowboy. If the number of Cowboys is tied then firing is simultaneous. A player may retreat instead of firing by moving each cowboy involved to a different town (only 1 per town) and loses the engagement. If the attacker wins they take control of the target of the attack and may replace the counter (up to 2 counters if rustling Cattle) with one of their color (except for Banks, Farmers and Jails). A Jail or Farmer is removed from play and a Bank is robbed. The successful robber rolls 3 die 6 and takes that amount of money from the owner of the Bank (the Bank remains under owner's control). If the owner of the Bank cannot pay the full amount (then pays all they have to the robber and the Bank is removed). Each time a player wins a Gunfight they take a Wanted Counter. If none remain they take it from another player their of choice. Victory: After taking turns 3,6,9 and 12 income is paid to players as delineated above. The game ends after round 12. Victory points are awarded for each Building or Transport counter (1 point per size of town). So a building in a Town with 4 Building or Transport Counters including itself is worth 4 points to the owning player. Each Cattle Counter is worth one victory point for the owner. If a train is in the town each Cattle Counter is worth 2 points. If a Farmer is in the town Cattle are worth 1 victory point less. To illustrate, if a Farmer is in same town Cattle counters are worthless unless a Train is also present in the town. In this case, they would be worth 1 point each. The player with the most Building/Transport counters and Cattle in a town is considered to control the town and scores bonus points equal to the size of the town (Cattle do not affect town size but do affect control). The Player with most money gains 5 victory points (2 each in case of a tie). The Player with the most Wanted counters scores 4 victory points. The player with most Points wins.