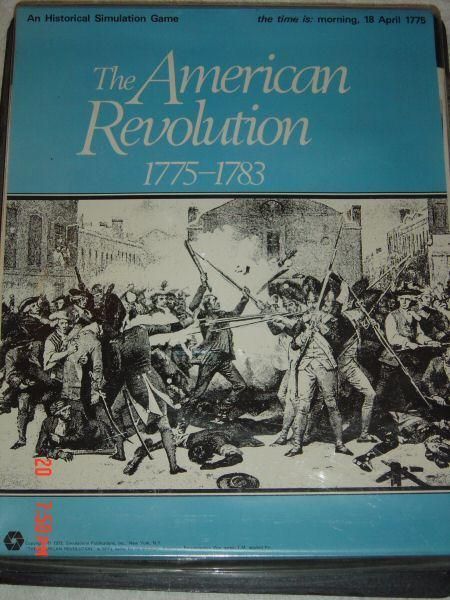 SPI area-movement simulation of The American Revolution 1775-1783. 9-page rules folder, 255 counters, unmounted 17" x 22" paper map. Regions on the map consist of multiple movement areas, with terrain-dependent movement cost to enter an area. Counters are multiples of strength points, each strength point being equal to 500 men. No combat distinction between infantry and cavalry or between militia and regulars. Colonial militia appears at full force in a region whenever a British force enters it but can never leave the region. Tory militia appears once per region the first time British regulars enter, and they can be converted to regulars and leave the region, but will never reappear in that region once they've left. The British player wins by controlling regions whose victory point total exceeds the scenario requirement. Colonials win by winning three major battles, by winning two major battles while limiting the British player to less than half of the scenario victory point total, or by lasting to the end of 1783 without the British player winning. Multiple "what-if" situations are provided, with each one adjusting the British victory point level required to win. Many of these can be used in combination, resulting in moderate replay value.