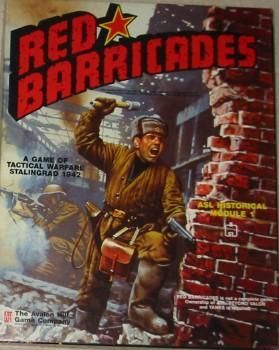 The battle of Stalingrad around the Red Barricades ordnance factory is recreated in 7 ASL scenarios, and 3 separate campaign games. The scenarios present different sections of the historical battle in the usual ASL format. The heart of Red Barricades are the campaign games. Rather than linking the scenarios, the campaign games consist of campaign days where players fight for control of the factories and surrounding buildings. Between these campaign days, players consolidate their positions, purchase reinforcements and get ready to continue the fight. The three campaign games cover the first few days of the German assault, the last days of the Soviet defense, or the full 30 days of the German push to take the area. Two historically accurate map sheets, new rules on terrain around Stalingrad (debris, railway embankments, storage tanks, etc), and new weapons such as Russian Molotov Projector are included. This module requires ASL and Beyond Valor to play.