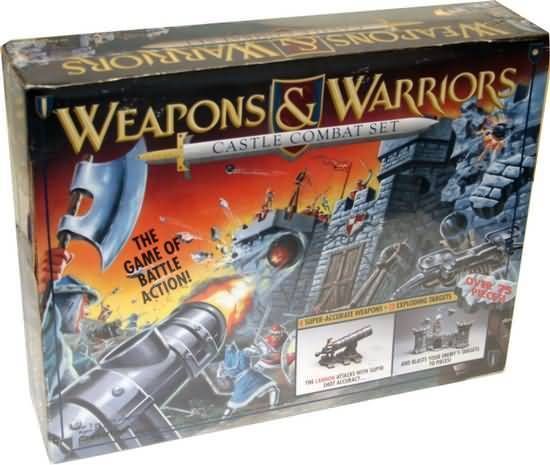 A simple action game. Basically, you each have a base with 5 or 6 targets (some require multiple hits or hitting things in order). You also have about 10 men. You arrange a man on each target, and then place the rest on various grey dots on your base. You each have mechanisms to shoot little balls..catapults and crossbows and the like. You take turns shooting 2-6 balls (depending on the die roll) at each other's targets. You continue to take turns until you wipe out all of your enemy's targets. Connecting the two bases is a cardboard strip with trees and grey circles. You can spend some of your shots to move a soldier towards your opponent on these circles. You are allowed to place your shooting device closer to your opponent's base at this time...moving it up to be level with the advancing soldier. However, advancing soldiers are quickly targeted. In play, the easy shots (soldiers and simple targets) get knocked out in the first few rounds. The rest of the game is trying to make the tricky shots.