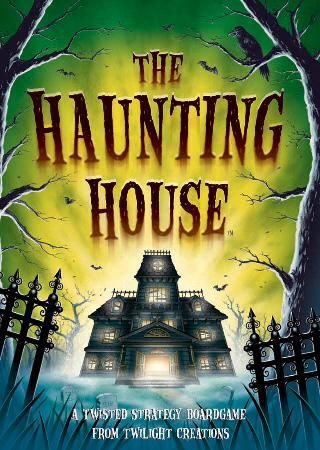 The goal of The Haunting House is to be the first to escape a haunted house that the players have entered. The haunted house is made up by randomly laying out tiles in a 6x6 square making up the floor plan and then adding entrance and exit tiles at opposing edges. Each player then gets a set of cards symbolizing different actions. Each turn consists of two phases: a random phase and planned phase. First, the random phase is where a number of random cards are drawn and executed, throwing the players off track from their plans. During the random phase, a few cards are inserted into each player's card set that cannot be chosen during the planned phase. Apart from normal move cards, there are also special action cards that may for instance move the exit or things like that. After the random phase remove the white bordered cards and perform the planned phase. Now, each player secretly select a sequence of 5 cards that define that player's actions that turn (somewhat reminiscent of RoboRally). Publisher's blurb The Haunting House is a wildly fun, fast paced, strategy boardgame with a twist. The object is simple, players enter the front door and race to be the first to reach the exit. It's not as easy as it sounds. Half the time the players choose their own path. The other half their paths are chosen randomly by opponents. Additionally, the board elements constantly change as the game progresses. The Haunting House features 38 tiles that make up the board, 60 cards and six custom-sculpted pawns.