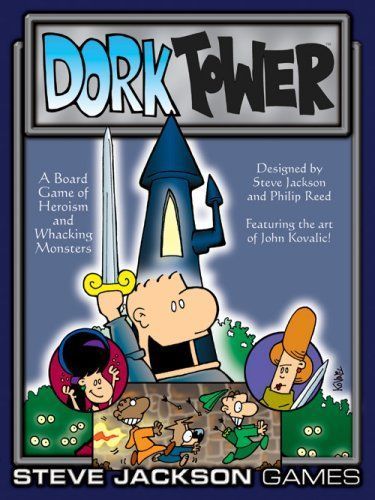 Each player chooses a character. The characters have been assigned strength, movement factors and a special ability. Each character has two levels; the players start at the lower of the two levels. A player’s character may advance to the higher level when ten experience points have been earned. Each player begins the game with sixty gold pieces and a scroll card. The characters begin their journeys from different kingdoms. The two Quest tokens are placed on their assigned spaces and the game begins. Each player, in turn, advances the character one has chosen, performs any encounters, performs any city actions if possible, encounters any other players if available and finally turns the Dork Tower one step clockwise. The position of the Tower determines which lands are in daylight and which are at night. One might battle monsters as an encounter. A player will receive a reward and experience points for defeating a monster. Losing to a monster results in a strategic retreat by the player. A player who can’t retreat after a loss returns to start with nothing but experience points. The player who can defeat the five monsters of Z’Mindrik the Wizard, who can only be approached at the Tower during the night, has saved the land of Aurora to win the game. Boxed game, with 56 cards, over 100 monster and character disks, game map with 3-D central tower, rules, character sheets, and two dice.