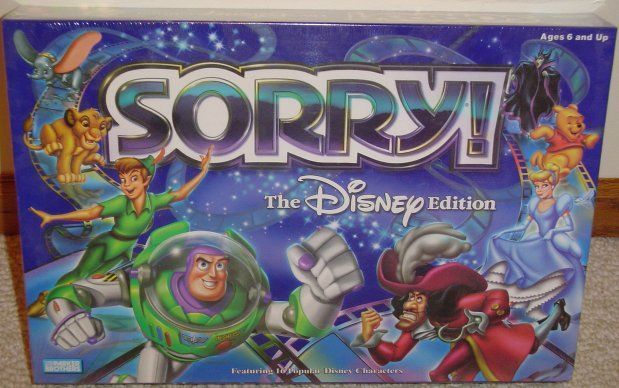 Sorry! The Disney Edition is a Walt Disney Licensed version of the original game of the same name. The basic premise is that players draw cards and move around the board based on the instructions shown. The first player to get all of his/her pieces into the his/her end spaces wins. However, there are some special instructions that must be followed. The most important is that the game is called Sorry because if you land on a space occupied by another player, that player's piece is returned to the start. You must also draw certain cards to start a new pawn and you must hit the end space by exact count. There are also some special cards that will affect gameplay and slides that can move you forward faster. The Disney version adds special cards that are only specific to certain players. In essence, this is the same Sorry as before but with a Disney theme.