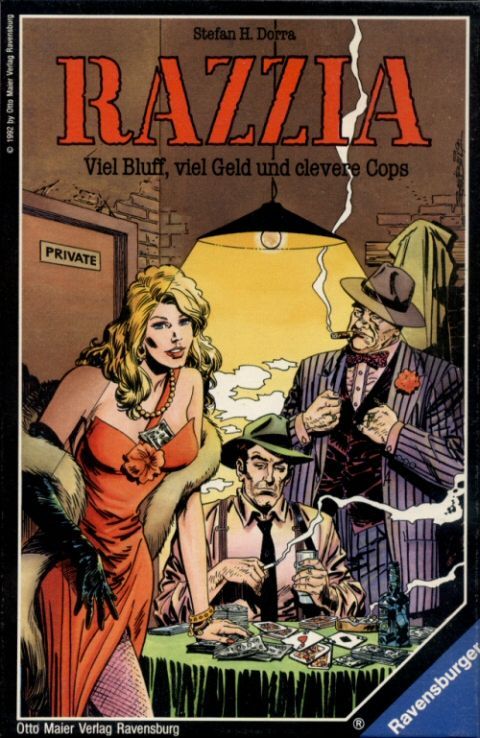 There are six different (but equal) gambling joints where bits representing money are distributed at the beginning of each round. The object of the game is to finish with the most money. Players simultaneously choose a card from their hands to play. Each card corresponds to one of the six gambling joints and depicts either a gambler or a cop. The cards are revealed, and in each gambling joint where a gambler has been played, the money will be awarded, à la Hoity Toity/Adel Verplichtet, to the gambler unless a cop has also been played in the joint, in which case the cop gets it; if a cop shows up but no gambler, the money stays where it is for the next round. When two gamblers or two cops both claim the money in the same joint, a negotiation mechanism which may involve the roll of a die comes into play. You have to do well in the simultaneity sweeps to get into contention at all, but doing well in the negotiation can make the difference between coming in first or second. The game comes in a small package about the size of a videotape and is attractively decorated in a sort of mid-1970s Gil Kane/Joe Giella DC Comics style. Re-implemented by: Pick Picknic