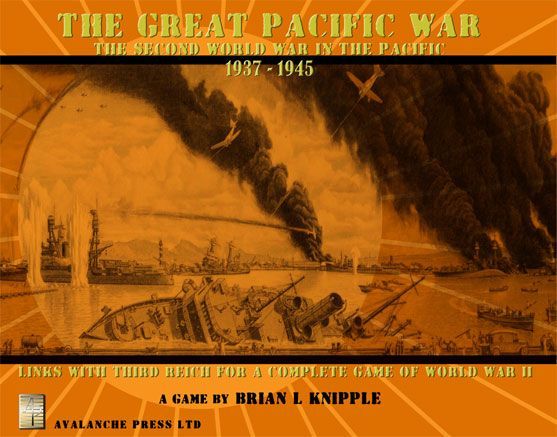 Description from the publisher: Great Pacific War is Avalanche Press' strategic-level game of the War in the Pacific. The game covers the entire war from December 1941 through 1946 and includes the forces of all participants. Players are placed in the positions of the commanders of the Japanese, British, Soviet and American forces in World War Two. The system is the same one used in Avalanche Press' game, Third Reich. In addition to five scenarios covering all or part of the War in the Pacific, Great Pacific War includes rules to link it and Third Reich to play the Second World War, a simulation of the entire conflict with up to seven players. Included in the game are five scenarios for the Great Pacific War and three scenarios for the linked Second World War. One of the Great Pacific War scenarios covers a possible 1931 conflict between Japan and America as postulated by the British journalist Hector Bywater in his book of the same title. The facts: Game scale is 60 miles per hex covering the battlefield on three 34" x 22" maps. Units are represented at corps, fleet and air army level. Each turn represents three months of actual time. The game system is built around players drawing impulse "chits" to determine how they can activate their forces. The emphasis is on the interaction of military, political and economic factors (as in Third Reich). The game system from our Third Reich game allows players to control the military, political and economic destinies of their nations in a struggle to dominate the world. Land, air and sea forces battle across almost a third of the earth's surface as the two mightiest navies fight for control of the Pacific. Players manage their economies and build and operate their military forces within the capabilities of their nations' abilities. In Great Pacific War the Japanese player must decide initially whether war with America or the Soviet Union will be his or her strategy. JapanÍs lack of resources make a war with one or the other a necessity. Also possible is a war with Britain and her ally, The Netherlands, who together control the riches of India, Java and Borneo. This strategy has many risks, the greatest being that America will enter the war on Britain's side. Coloring all is the massive Japanese investment in China and the importance of those conquered territories to the Japanese economy. The American player must move a nation unprepared for war to a position of strength, while attempting to support the Nationalist Chinese in their conflict with the Japanese. In the linked game players have also to consider the effects of their actions on the global conflict. A Soviet player desperately defending Moscow in 1941 can little afford a Japanese attack on Vladivostok. Likewise a British player fighting Germany with only a seemingly soon-to-be-defeated Soviet Union as an ally, will not welcome a Japanese attack on his eastern possessions unless it brings America into the war. Historically Japan went to war to obtain the resources denied her by the Allies embargo of steel and oil and because German successes appeared to offer Japan the opportunity to join a victory almost already won. The question is whether you and your allies can do any better than your historical counterparts. Components: Three 34” x 22” maps, 560 playing pieces, rules, three scenario books, political events and charts. Note: The maps are not mounted like those in JP's Third Reich were. This solves the problem of the maps not adjoining properly (as in Third Reich), but will upset those that like hard mounted maps. The game marries up with JP's Third Reich, but don't expect the maps to do so. When played together, action will be on separate maps to create a monster game of the entire Second World War.