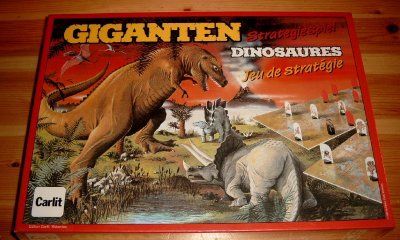 Giganten could be briefly described as "Dinosaur Stratego." Each player has a set of 23 saurians (dinosaurs of various kinds, pterodactyls, pleisosaurs, etc.) which are stand-up cardboard pieces with plain backs, so the opponent cannot tell which piece is which. Pieces move and attack each other Stratego-fashion, with the goal being to find your opponent's eggs. There were two versions of the game produced. The original 1981 version came in a small box, with a larger box coming out in 1982, and had numbers on the pieces to indicate their strength on land and in water (air being a special case). The larger version won the "Essener Feder"-prize (prize for the best rules) in 1983. The later (1992) version again came in a much smaller box and did not have numbers on the pieces, instead having a booklet that shows which pieces defeat which others in each kind of terrain (functionally it appears to be similar). This version also has fewer types of creatures than the first - no crocodile, diplodocus, etc. In the included booklet of the small edition "How came the idea to Giganten", Hubert Pinthus talks from an old, well known game with opponents of unknown strength. It's clear that he meant "Stratego" and he admitted that Giganten was heavily inspired by Stratego. The change from military units to dinosaurs is a minor change, but there were more important changes: 1 - small edition: added variable terrain (land, swamp, lakes); the lakes in Stratego were not terrain, but mere obstacles. 2 - large edition: added variable board consisting of 4 parts and added 2 more dinosaurs. The French version of the game was called "Dinosaures."