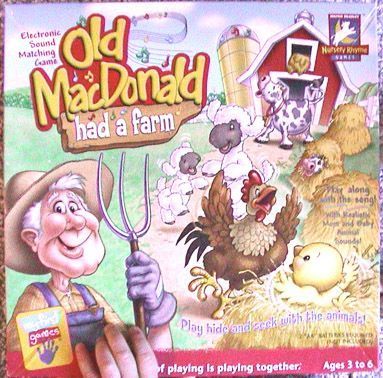 Memory game where players try to match a mother animal with her babies. The babies are hidden under plastic haystacks and a possible match is determined by placing a haystack on an electronic device (that looks like a barn); the animal sound corresponding to the baby animal under the haystack will then play. If it is the wrong kind of animal, the players at least know which animal is under that haystack and should remember it for later. If it is the correct animal, the song "Old MacDonald" will play (using the verse corresponding to the correct animal) and the player can lift up the haystack and keep the baby animal. Whoever collects the most animals win.