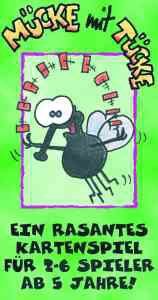 Mücke mit Tücke features cards with animals, the sound that they make (in German), a value, and sometimes a mosquito. Players take turns revealing cards from their deck in front of them. If a number or a value matches a card already visible, the two (or more) players who match have to speak the "other" before their opponent. If a Donkey-3 is revealed, and another player already has a Cat-3 showing, the player with the donkey card will want to say "Miow" before the player with the Cat card says "i-ah". If the animals matched, they would want to say the opponent's numeric value. The winner gets their opponent's faceup cards, adds them to his own, and then shuffles them into their draw deck. There is also a slap jack element; there are hand cards that when revealed, cue players to slap the highest-value card showing a mosquito. The winner gets ALL face-up cards. Once a player runs out of cards, the person with the most cards is the winner.