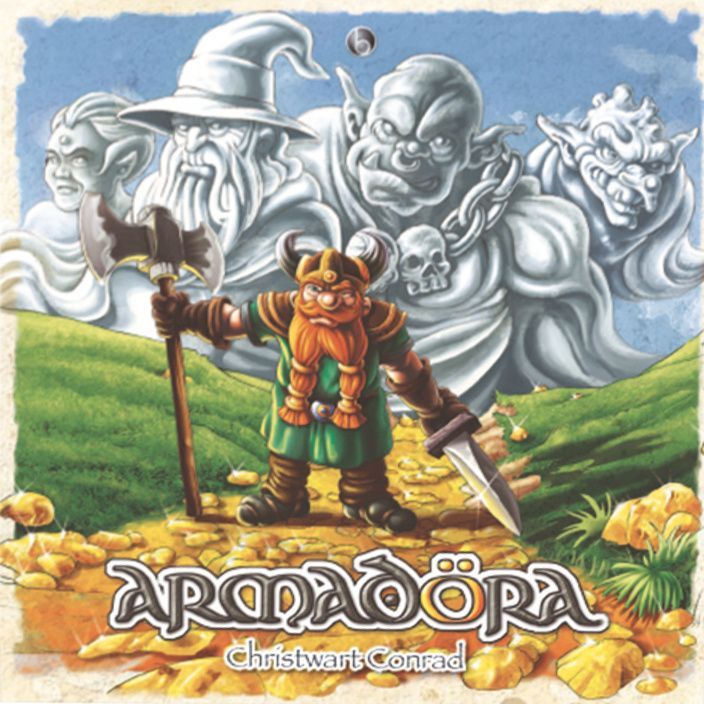 In Nuggets (2003), players try to surround the "gold mines" (numbered cylinders) on an 8x5 grid board. On a turn, a player either places a numbered tile face down or places two fence sections on the board; these fences determine the borders of each claim, and each claim must be at least four spaces large. At the end of the game, all tiles are revealed, and each gold mine is awarded to the player whose tiles in that claim have the largest sum, with ties resulting in an equal division of points. Whoever collects the most mine points wins. Armadöra (2013) uses the same gameplay as Nuggets for the base game, albeit with the players themed as orcs, elves, mages and goblins on the hunt for dwarven gold. Armodöra also adds advanced rules to the game, with each player receiving one reinforcement token and 1-2 special power tokens. Instead of placing a warrior or erecting palisades (fences), a player can place a reinforcement token on one of his warriors in a territory that's already filled, boosting the strength of that warrior by one. A player can use his special power before taking one of the three normal actions, with the elf shooting an opposing warrior in an unfilled territory (lowering his strength by one), the orc placing an additional palisade that turn, the goblin placing a second warrior (with this one being face-up), and the mage looking at the value of an already placed opponent's warrior.