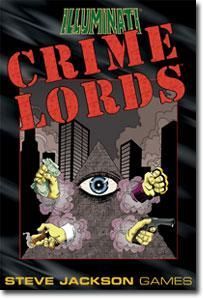 Rival mobs battle for control of the city. Take over the rackets, rake in the dough, and rub out the opposition. It's the American dream. You'll start with a few gangsters and some cash. Recruit more crooks and take control of income-producing operations like bordellos, chop shops, and loan sharks. The police and the Feds are after you, but your biggest threats are your fellow mob bosses. Scheme, negotiate, back stab. You can share a victory, but it's much more satisfying to say "There can be only one Boss. And it's me." Crime Lords is based on the Illuminati system. It's not a supplement, but a separate stand-alone game created by Steve Jackson. Boxed game with 112 cards, rules, die-cut money and status counters, and dice. Illustrated by Dan Smith.