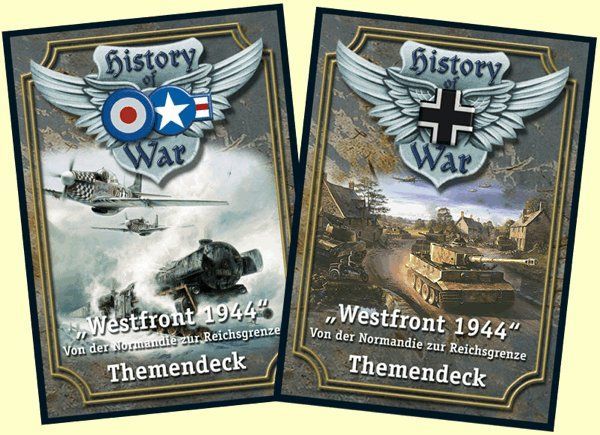 History of War is a collectible-strategy-card-game of average complexity that has no rarity or random distribution - which separates it from most of the other TCGs/CCGs. Each set contains the same cards! Purpose of the game is to conquer map-cards with ground units, aircraft and ships similar in the mechanics to the Warhammer 40.000 card game. Turn sequence is (in short form): draw cards phase place and redeploy cards attackers attack phase (defender can block) defenders attack phase (attacker can block) retreat phase winning phase end of turn phase The game is only sold in pre-constructed theme decks with 55 cards each. Currently available for the Axis player: A German starter deck (rules included), a German expansion deck. For the allied player: A British and US starter deck (rules included), a British and US expansion deck. The starter decks and the booster packs can be bought in many shops fully translated in English! The last edition fully translated was the Pacific Edition. In German there are a lot more: A Russian and an Italian expansion set, the "Fall Gelb"-Edition with German and French cards, the polish and finnish game packs and the top-seller "Africa Edition" - a box that contains both an axis and an allied starter set. Both are balanced very well and recommended for beginning with HoW. In February of 2009 there came a second box called "Road to Victory: Westfront 1944". The third starter box edition "Philippines 1944 - The biggest battle of all times" is released in Novembre of 2012. Expanded by History of War - "Fall Gelb" Edition History of War - Italian Expansion Set History of War - Russian Expansion Set History of War - Polish / Finnish Expansion Set Re-implemented by History of War - Pacific Edition History of War - Africa Edition History of War - Road to Victory: Westfront 1944 History of War - Philippines 1944: The biggest battle of all times (newest edition) From the publishers homepage: "Though widely realized in board and computer games a long time ago World War II was till now a dark horse in the Trading Cards (TCG) field. On the o­ne hand it depends surely o­n the fact that the Second World War is a very serious topic which of course does not simplify its realization in a card game, o­n the other hand this very background requires the great historical precision and complexity that seemed difficult to achieve until now. The alphaBIT company from Hannover (Germany) takes charge of this problematic topic from now o­n and excels by a balance of realism and subtle intuition. History of War (HoW) presents the Second World War solely as the tactical fight of units. Retaliatory weapons, atom bombs or personal names like those of generals are deliberately excluded from the game. The goal of the game is a conquest of land cards that should bring together 15 win points. A means to an end in this case are the mentioned units and the HoW really succeeded to bring together three large parts of a war: fight by land, by air and by sea. It makes the game truly particular as even computer games have difficulties in combining these three types of units. As a rule they are divided into land/air or sea/air. In History of War o­n the contrary the players can use all the units like infantry, tanks, artillery, fighters, bombers, submarines and cruisers in o­ne and the same deck without problems. In addition just like in all other TCGs they can choose freely in a great card pool and make up their own deck. There appears another positive aspect that would please first of all the players with not much means: there is no degree of rarity in HoW. All the cards of an edition are available exactly o­nce in a set which means that a player knows what he buys and already with a few sets is equipped enough for a chosen side. The mentioning of the units provokes the question how they could be paid. The usual principle in other TCGs works here as well: some special cards provide the resources. These are called base improvements in HoW. These cards deliver not o­nly the important technical values (TVs) necessary for payment of units, action cards and effects, but they possess as well useful qualities, so that the mere choice of his base improvements has decisive consequences for a player. The TVs deliver also the country improvements that can be placed directly in the countries and thus are imminently exposed to the attacks of the enemy, but then dispose of the interesting effects. The units paid with the TVs are played in the so-called deployment zone. The units have different attack and defense values for various areas like land, air and sea. The victory flags o­n the unit cards necessary to conquer the countries are transformed into the win points at the end of the game. More detailed and profound division of the values, ammunition consumption, moral and so o­n known from other games were deliberately resigned to make a game easy-to handle. Such special characteristics of the units were replaced by useful abilities that make the game fluent and the rules clear. The final transformation of the units into win points is based o­n historical accuracy. All the cards show the high quality pictures or even photos of the Second World War and the unit cards are enriched by engineering data. HoW is surely a must for lovers of strategy games, interesting and affordable o­n top of that thanks to the absence of degree of rarity." You can find lot of pictures and a rule discussion forum on their German webpage: www.history-of-war.com [you can change the webpage language clicking on the UK banner on the left, once in]