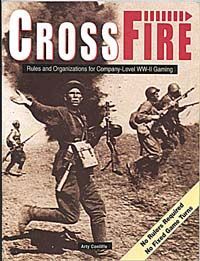 CrossFire: Rules and Organization for Company-Level WW-II Gaming , combat mechanics that simulate the interplay of fire and movement combined with a command system that represents unit flexibility. Emphasis is on infantry combat. Crossfire is an innovative set of rules very unlike most other systems out there. "Turns" (having the "initiative" is the term in Crossfire which loosely matches the concept of a "turn") are not sequential (as in "step 1 movement, step 2 artillery fire, step 3 melee, etc, etc") and distances and moves are not measured (we do some measurement in our house rules). This different approach makes for a breathlessly exciting game system where critical situations are developed realistically and resolved quickly. The mechanics also make for amazingly quick games. Scenarios that have previously taken more than a day to complete are finished within a few hours. Once you try this game, you won't want to go back to others, believe me! Crossfire focuses on infantry action at the company level with squads as the smallest element. Some people play with house rules which add more detail to the armor rules - but the existing rules work fine as Crossfire is primarily and infantry orientated rule set. Crossfire is actually a step up from our 1:1 preferences, with figures mounted on stands of 2-3 figures representing a squad. This was a bit of a nervous jump from 1:1 for me, but the result has been very rewarding. I think one of the reasons I like it so much is that the idea of squads moving about is a bit like Avalon Hill's Squad Leader which we played years and years ago. That was a great game. Also Available: Hit the Dirt! (CrossFire Scenarios) 21 scenarios for Cross Fire in a booklet.