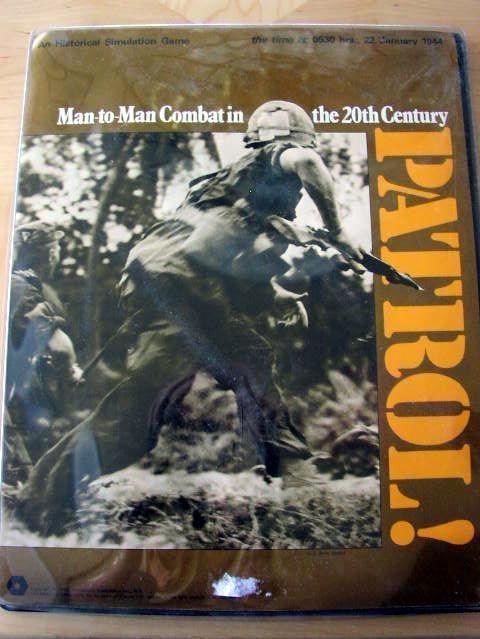 Patrol: Man-to-Man Combat in the 20th Century, is an individual man level simulation of non-urban infantry combat from World War 1 to the present. The game features various scenarios in which the average infantry squad would become involved. Typical scenarios simulate meeting engagements, ambushes, raids, snatch missions and assualts on fortified positions. Sequel to the game Sniper! (first edition) Popular tactical combat system. As in Sniper, each player controls the equivalent of a squad of 5 to 15 men depending on the period, the scenario, and whether you attack or defend. One scenario corresponds to a few (one to five) minutes of real time action. The scale is a little larger than in Sniper (5 meters/hex, 5 seconds/turn vs 3 and 3 in Sniper), and there is no facing. The game system (though rated 7.1, ie pretty high, on SPI complexity scale), is quite straightforward and easy to learn. In the beginning of each turn, players secretly "buy" actions for all of their men. A normal man has 10 Movement Points to expend per turn. Fire, direct or opportunity, consumes all MP, as reloading one's weapon, or rearming (ie readying to use it after throwing a grenade or shooting a rifle grenade). Standing up, preparing a grenade, throwing it, cost 5MP. And movement costs MP depending on terrain... After all actions have been plotted, players check for panic: a certain percentage of all your men, depending on their hex number, have their actions canceled, or move randomly. (although very annoying, this rule does wonders at simulating low level control problems). Then, all remaining actions are performed: combat, movement, and finally grenade and artillery impacts. Rules cover a large variety of equipment: weapons like rifles, MP, MG, rocket launchers, grenade launchers and flamethrowers, but also barbed wire, pillboxes, artillery, mines, and up to one vehicle (APC or tank) per side. Five kind of combat situations are covered: patrol, reconnaissance, ambush, raid and assault. Some lending themselves quite well to solitaire play. A large number of scenarios (from WWI to modern) are provided, and you can easily design your own. A standard scenario plays in a couple of hours. Altogether, I think the system is pretty good for such a man to man combat situation. However, be warned that this very detailed scale has a peculiar feeling, which not all "tactical" game players (ie players used to ASL or Gamers TCS, which focus on company/battalion level units) will like: in Patrol! the player is a sergeant, not a captain. review by: Francois Charton Game Scale: Game Turn: 5 seconds to 5 minutes Hex: 5.4 yards / 5 meters Units: Individual Soldiers & Vehicles Game Inventory: Six 9 x 9" four color maps One dual-side printed countersheet (400 1/2" counters) One 32-page Patrol rulebook Foure Player Aids Cards Two 6-sided dice Solitaire Playability: Medium Complexity Level: Medium Players: 1 or more Playing Time: 2-6 hours