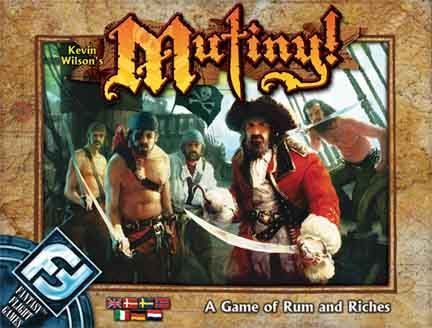 From Fantasy Flight Web site: Captain Blackheart lies in a drunken stupor, and the pirates scheme to choose a new leader. In order to seize this position for themselves, the candidates must win the trust of the five most senior members of the crew in the only way they can — bribery! However, they’ll need plenty of doubloons and rum to gain the loyalty of this treacherous crew, and a pirate’s word is only good until the money is spent. In MUTINY!, each player bids for the right to use the special abilities of the five most senior crew on the ship. However, they must be careful not to bid too heavily on any one crew, because bids linger from turn to turn, making it difficult to adapt to the other players’ changing strategies. Worse, the ship might sail to an island filled with danger for the crew they’ve just spent their hard-earned bribes on, costing them the advantage they’ve just gained, or worse. MUTINY! is a bidding game of pirates, backstabbing, and rum for 2-5 players, playable in 45-60 minutes.