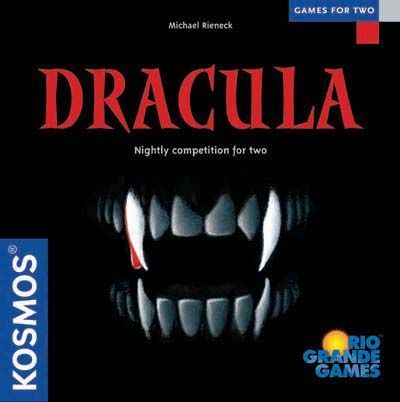 From the publisher: Count Dracula has left his home in Transylvania to travel by ship to London, where he plans to hunt for innocent victims. The famous Dr. van Helsing got wind of Dracula's plans and immediately caught the next carriage to London. It is a race against time! Van Helsing tries to find and destroy all of the vampire's coffins, while the count tries to find five victims. Will the horror end tonight or will the count's reign of terror continue? Dracula is part of the Kosmos two-player series. Dracula is a two player game hand management/memory game. One player takes the role of Professor Van Helsing, the other player is Dracula. Van Helsing is trying to locate and destroy Dracula's coffins whilst Dracula is attempting to find victims that he can turn in to vampires. Each player has a deck of cards which they place face-down on the board. These cards contain the coffins/victims that they other player must find to win. They also contain minions, helpers and traps that can harm or distract the other player. Players can also place coloured barriers to obstruct their opponent's progress. Players move their pieces by playing from a second hand of action cards. Each action card contains an ability and a distance to be moved. When a player ends their move they reveal the card that their piece has landed on and (if it is one of their own) replace it with a new card. By a process of elimination and deduction they are trying to find their target cards before their health is worn down to zero by their opponent's traps.