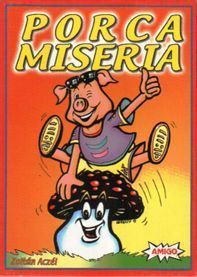 From Amigo: Be the fastest one to get the right lucky charm! But which lucky charm is the right one: mushroom, pig or chimney sweep? Your personal lucky number will tell you. You need luck and talent to gather the most cards of all players. START OF PLAY Three target cards are placed in the middle of the table. Each player must be able to reach them well with both his hands. The remaining 63 cards (symbol and touch cards) are shuffled and this deck is placed face down on the table. One player is chosen to be the starting player. The Lucky Number Now each player receives one or more lucky numbers. The starting player places the face down deck in front of him on the table. He reveals the topmost card in such a way that everyone can see it at the same time. The revealed card is either a symbol or a touch card. A symbol card shows one to eight small "lucky mushrooms" (blue), "lucky pigs" (yellow) and chimney sweeps (red) in different combinations and in the color of the target cards. When a symbol card is revealed, each player has to find out, how often a symbol is found on the symbol card. If the number of one symbol equals the lucky number of a player he tries to draw the appropriate target card as quickly as possible towards him. For each target card a player has successfully drawn he receives a card from the deck. These cards are placed in front of the player. If a player draws (touching counts as drawing) a card, which he was not allowed to draw (e.g. because he miscounted the symbols) he has to put three of his own cards in the jackpot, for each card he has drawn wrongly. If he has less than three cards, all of them have to go into the jackpot. The jackpot is a collection of cards (maximum five). It is placed near the target cards. If there are at any time more than five cards in the jackpot, the surplus cards are shuffled back into the deck before revealing the topmost card. At the start of play there is no jackpot. After the first player has given a card from the deck to each player who has correctly drawn a target card, the target cards are placed back in the middle of the table. The revealed card is placed in the jackpot as are all the cards the players have lost. If a touch card is revealed, quick reactions are called for. Each player tries to touch the matching target card with both his hands, placing one after the other. This will create a huge pile of hands, sometimes in wildly mixed order. The target card remains in the middle of the table. A touch card shows a big "lucky mushroom", a big "lucky pig" or a big "chimney sweep". Whoever is the first to have only one hand of another player between his two hands (e.g. there are not two or more hands between his two hands (the sandwich)) receives the revealed touch card and the jackpot. After the starting player has given the touch card and the jackpot to the winner, this round is finished. If there are not enough cards in the deck to give to all players the cards they won, The game ends immediately. The player with the most cards wins the game.