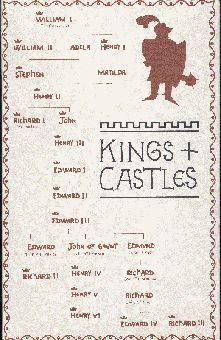 The last English King (as opposed to King of England) died in 1066. This game is about what happened next. The men who occupied the throne for the next 400 years were a particularly unpleasant bunch, whose main thought was of personal aggrandisement. Having deprived the English of the right of self-government, the more energetic of them set about trying to do a similar job on their neighbours. In Kings & Castles the players take the part of these men as they pursue their ambitions at home and abroad. The treatment is broad-brush and fairly abstract: there is a map and the counters carry pictures of castles and soldiers, but you don't have to start worrying about dice and combat results; this is not a wargame. Players take turns to conquer as many regions as possible with their own and opponents forces - an intriguing mechanic - then decide whether to tax the hard working peasants or not. Plenty of decision making and room for tactics with a different player/king sequence every time you play.