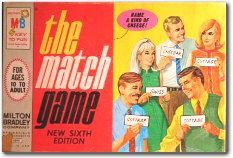 Based on the popular long-running television series, the players write down their response to a statement that has many possible answers. (Name a type of cheese, for example ala "Family Feud") The players score based on matching the responses of others. The players can form teams and try to match teammates as the television series or each can play for oneself and try to match the plurality. Those who don't match the plurality pay a scoring chip to each player who did. Six editions plus Fine, Collector's and a Briefcase Edition were published. When the series was revamped and revived in 1973, the home game would include the updates. “The” was dropped from the title and the format of the game would be two players trying to match as many of the six answers as possible. A third player acts as moderator. Each player would get two tries and the questions were now statements with a word missing. The players have to guess which word would be given most often. The player who had the higher score after two rounds would play the Super Match round. The first step would be to guess the most popular answer of a survey. The second step is to match the response of the moderator. The player who has won the most money after three games is the winner. Only the rare third edition features the jokes statements for which the show is famous.