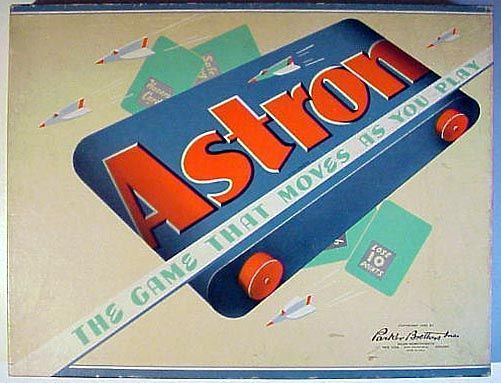 The original Astron was published in Britain by Waddingtons, using the same rocket ships supplied in their Wide World Travel Game. The game depicts a space race from Earth to Saturn (hence the dinky Dan Dare style metal spaceships). Later Astron was published as an around-the-world travel game. Even later this around-the-world travel game was given the more apt name Sky Lanes otherwise using the same components. The special feature common to all versions is a game board that scrolls from one end to the other. Players are dealt cards to help them both in moving their rocket or plane and in scrolling the game board. In the travel version each time a player's plane sits on an airport space at the end of any player's turn, they get an Airport card. Similarly, if a player's plane ends any turn on a hazard, they draw a Hazard card. The object of the game is to have the most points in hand when the board reaches the "GAME OVER" position. Airport cards add to your point total; Hazards subtract from it. While the rolling board, card drafting mechanism and even game play are the same, the British (Waddingtons) and American (Parker) games look very different. There are pictures of both versions in the gallery. The game was released at a time in the period when commercial air travel was really taking off.