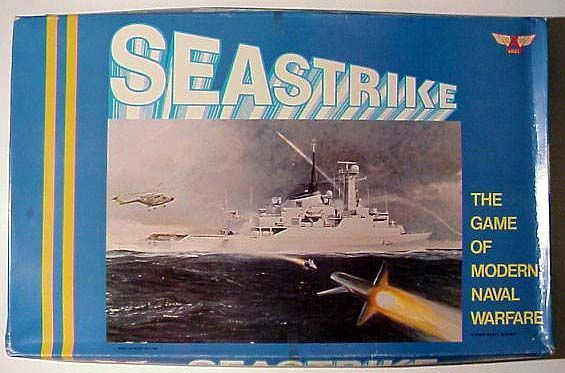 "SEASTRIKE is a game of modern naval warfare - providing a simplified but realistic simulation of the planning and tactics of naval combat today on a local scale. ... Basically each side secretly selects and deploys the forces, which may include guided missile ships, submarines, helicopters, multi-role aircraft and land-based missile sites, considered necessary to achieve a defined objective. The ships and aircraft are moved and guided missiles and other weapons fired. Combat is resolved by means of a carefully programmed 'computer-card' system. "Two approaches to the game are suggested, SEASTRIKE I and SEASTRIKE II. The former is a single complete game and the latter is more detailed and more flexible and enables players to evolve their own games." [From the promotional material] This is a naval coldwar wargame some way between miniatures and boardgames. It uses cards, write-on counters, and measuring devices. Scale: 1/100,000. 1 cm = 1 km (size of counters excepted)