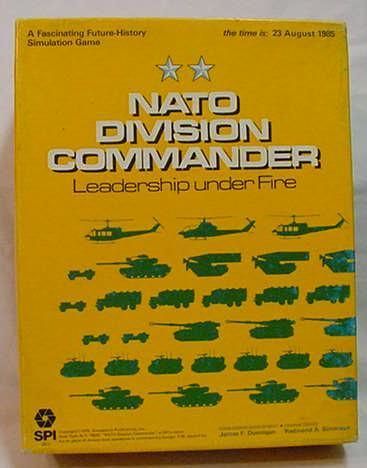 Often misquoted as "the monster game of modern warfare", NATO Division Commander is a much-maligned SPI WWIII title that, because of being widely misunderstood, is often more studied than played. Described in the rules as a "battalion level simulation of conflict in contemporary Europe", NATO Division Commander gradually introduces players to the most complex version of mechanics through a series of scenarios of increasing difficulty, the easiest of which is simple, fun, can be expanded, and should not be avoided. When completely addressed, the game is a War College-level education on the conduct of World War III operations at Division/Brigade level between NATO and Soviet forces. The game system builds on the combat-as-part-of-movement late-SPI systems such as Next War and Fifth Corps, and has as one of its basic premises the idea that unit strength is subordinate to tactical and command considerations. Central to its uniqueness, NATO Division Commander contains two identical mapboards and rules for Controller play, producing a refereed, double-blind, fog-of-war effect which is still unique today, more than 30 years after publication. The game includes solitaire and face-to-face rules to help controllers build up their knowledge of the game, and decide what they will include, and what slows the game down too much for their taste: thus allowing the game experience to be controlled for the players' experience and expectations. It also allows testing of scenarios before controller use. Scenarios are comprehensive and infinitely flexible, which makes demands of controllers, and offer a unique playing experience for those peering down the gun barrel. With 1200 counters, rule books, and a pile of playing aids, NATO Division Commander still is, the one true smorgasbord of World War III land-based operational simulations.