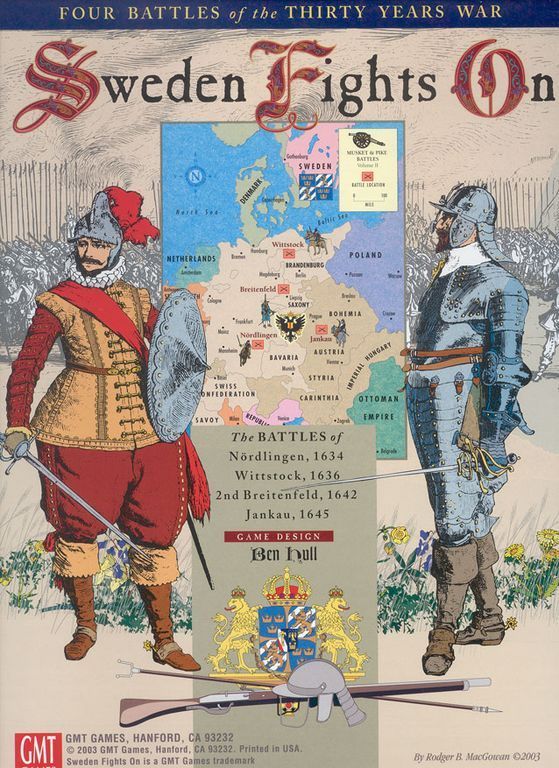 Sweden Fights On is a tactical battle game featuring four battles from the later half of the Thirty Years War. It is the second volume in the Musket & Pike Battle Series covering warfare in the 17th Century. This volume traces the fall, revival, and pinnacle of Swedish military fortunes after the death of King Gustav II Adolf at Lützen in 1632. The Musket & Pike Battle Series transitions from the English Civil War period (This Accursed Civil War, Vol. I) to the Thirty Years War period with added features such as limbered guns, double-sized batteries, and organic regimental artillery. The system emphasizes command and control. Armies are divided into three or four wings. Each wing has an order that limits the types of actions that units of that wing may perform. Victory goes to the commander who can coordinate the actions of these wings in the heat of battle. Units are infantry brigades, cavalry regiments, and artillery batteries. Rules include Cavalry Charges, use of the cavalry's pistols to skirmish or use in close combat, artillery grazing fire, infantry techniques of fire including advancing, retreating, and salvo firing. Play is highly interactive, and a battle can be played through in one sitting. The four battles in Sweden Fights On are: Nördlingen 1634 Though the Swedes struggled with command after the death of King Gustav II Adolf, they continued to exploit the momentum he had generated. A strong Swedish force pushed into Bavaria under the joint command of Duke Bernhard and Field Marshal Horn. The Habsburgs effected a union of forces with their Spanish cousins at Nördlingen, besieging the Protestant stronghold. The Swedes were drawn into a trap. Wittstock 1636 The Cannae of the Thirty Years War. Field Marshal Banér had his lines of communication cut by an Imperial-Saxon army under General Hatzfeld. In a daring plan, Banér divided his numerically inferior force and launched a double envelopment. In a desperate struggle for Vineyard Hill, General Torstensson's cavalry held the line just long enough for General King's cavalry to make the march around the Imperial right flank. 2nd Breitenfeld 1642 Field Marshal Torstensson caps a brilliant campaign with a siege of the Imperial fortress of Leipzig. Archduke Leopold commanding a larger Imperial army rushes to engage the Swedes. Within sight of the same ground of Gustav Adolf's greatest victory from eleven years past, the armies met. The Imperials had hopes for another Nördlingen, yet they got another Breitenfeld. Jankau 1645 Field Marshal Torstensson launches a surprise winter campaign aginst the unprepared Imperial forces in Bohemia, catching the Emporer himself virtually unguarded at Prague. With all haste, General Hatzfeld is recalled and an army cobbled together to stop the Swedes. The armies came together in the wooded hill country southeast of Prague. COUNTERS 772 full-color die-cut counters. MAP Two 22"x34" full-color back-printed mapsheets OTHER: One 10-sided dice 24-page Series Rulebook 40-page Playbook (including Lion of the North conversion rules) 1 11x17 Player Aid card