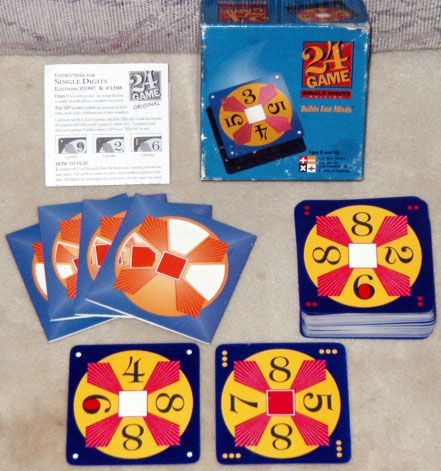 Players win points by being the first to correctly identify how the four numbers on the card can be manipulated using addition, subtraction, multiplication, and/or division to arrive at the number 24. Cards come in three levels of difficulty, with the easy cards being worth 1 point, medium cards worth 2 points, and hard cards worth 3 points. Comes with "puzzle sleeves" that introduce the idea of variables (basic algebra) by covering up one of the numbers and making it "wild". In the Dutch countries of Europe this game was introduced by putting them on the back of Flippos (which are caps with the Looney Tunes and Chester Cheetos on them). On the back of the Flippos with numbers 291 t/m 305 this game could be found, after which it became very popular in those countries. This made the sellings of the 24 Game rise. Strange enough this was only for a short term, while the game was thought to be associated with those Flippos.