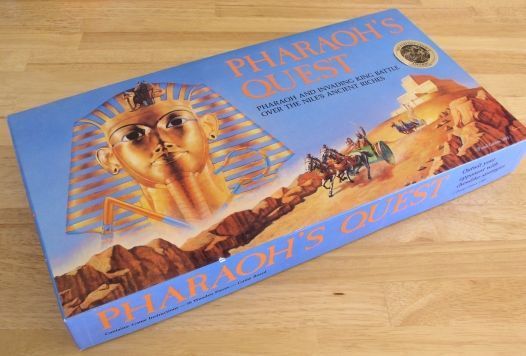 Pharaoh's Quest is a strategy game presented with a historical flavor. It presents itself as a tool used by Egyptian pharaohs to learn strategy; around 1700 BCE, the Egyptian empire was conquered by the Hyksos and it took them 100 years to drive the invaders out of their lands. One player assumes the role of an Egyptian pharaoh and the other a Hyksos invader. The game takes place on a board that is nine by four squares; an extra 4-square row extends the playing area at the bottom left of each player's side. The players set up their pieces in their respective corners and take turns to move their pieces. Each player has four cities and the remaining pieces are military units with different movements. The first player to capture all four of their opponent's cities (by moving military units onto them) wins the game.