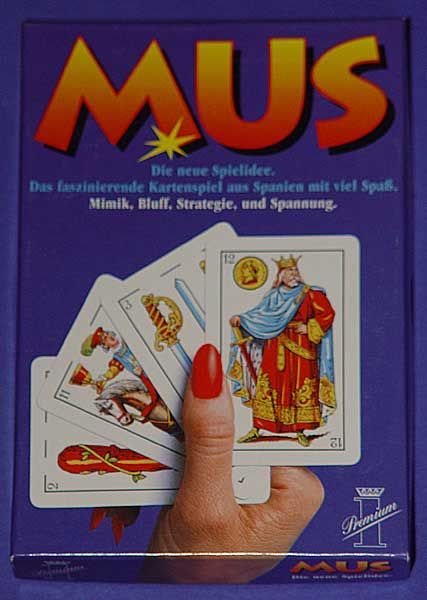 This is a Spanish card game born in Basque Country. The first reference about this game goes back to 1745, when Don Manuel de Larramendi, philologist and Jesuit basque, quoted it in the trilingual dictionary (Basque-Spanish-Latin). It is played by two opposing pairs of players with the Spanish deck, which is a deck of 40 cards without eights or nines and no jokers. Usually all 4 "3" cards count as kings and all four "2" cards count as aces. It has a variety of different rules in the different regions of Spain. In every round of the game Mus (discard) is either agreed or stopped. Then, four bets are made on the same hand of cards: * Grande (Biggest): playing for the highest combination of cards; handiak (big ones) in Basque. * Pequeña or Chica (Smallest): playing for the lowest combination of cards. * Pares (Pairs): playing for the best matching card combination; pareak in Basque. * Juego (Game): playing for cards total values of 31 or more. Sometimes replaced by a Punto (Point) special round; jokua in Basque. At last, accepted bets and passes are counted until one of the pairs of players reaches the previously agreed amount (different standards in different regions of Spain, but most commonly 30). The pair of players winning most out of three games wins a vaca (which means cow in spanish), and the pair winning most out of three vacas win the match. One other special feature of Mus is that it is a mostly verbal game, with little card-involving action, limited to deal and discard (if any). After cards are dealt and Mus (discard) is stopped, all rounds are played verbally, bets are called, passed, accepted or rejected but cards are not shown, dealt or touched in any further way, and the player only is obliged to show them in the end of the round if needed in order to resolve any accepted bet. This makes it a poor card game to watch other people play, and learning to play it through only watching is rather difficult in comparison with other card games.