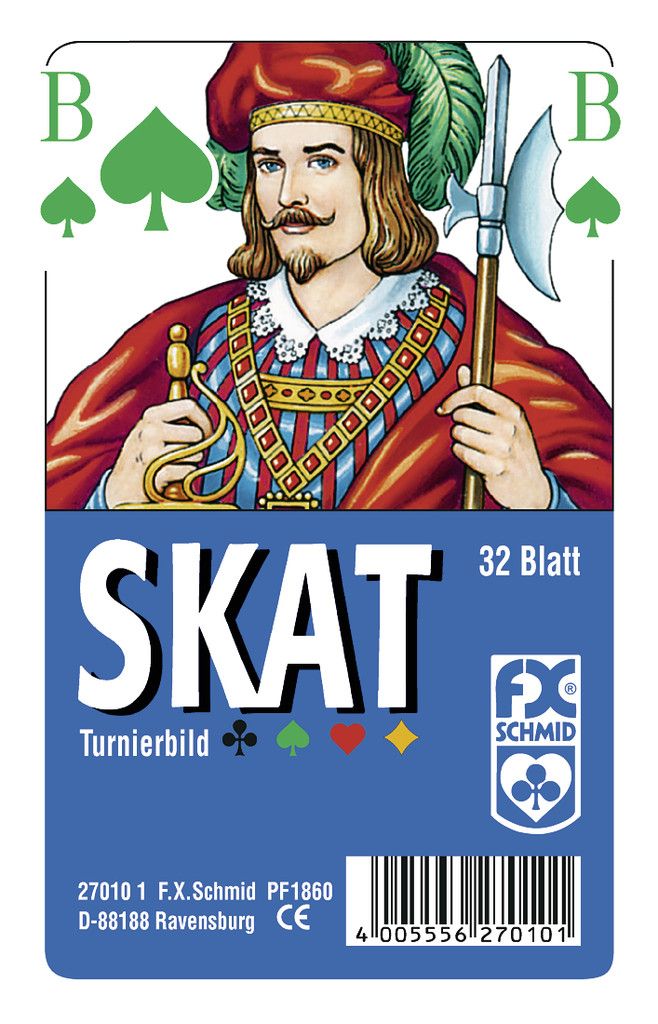 Traditional German card game for three players played with a standard card deck (2-6 removed), roughly 200 years old. The game is based on Schafkopf, Ombre (bidding) and Tarock (remaining cards). The latest revision of rules as approved by both the International Skat Players Association (ISPA) and the German Skat Association (DSkV) dates back to 1998. A play comprises two phases: first an intricate bidding process to decide the solo player who choses the type of game to be played in the second phase, the actual playing of tricks. If he wins (takes more than half the total worth of cards in the game), the solo player alone will score points equal to the announced type of game and other modifiers (listed below); otherwise, the other two players will each score the double amount of these points. Both the bid and the final score depend on type of game announced combination of Jacks margin of winning (score 90+: "schneider"; take all tricks: "schwarz") (optional) declaration of margin of winning before the first trick is played (optional) open play of cards (optional) play with the initial hand ("hand" play) (optional) doubling of scoring value: *2 ("Kontra"); re-doubling *4 ("Re"); inofficial rules allow re-doubling ad infinitum exeption for the Ramsch variant including sub-variants: Highest total worth of cards taken as tricks is scored negatively; the score is doubled when one other player took no trick ("virgin"), also doubled for each passing of the remaining cards without exchanging, if the drafting Ramsch variant is applied ("geschoben"); a player may also try to "shoot the moon" by taking all tricks (consequently scores +120 alone when successful). The solo player can choose between the following game modes: Suit (one suit and Jacks are trumps) Grand (only Jacks are trumps) Null (no trumps, solo player only wins without tricks). Inofficial variants: The most popular variant is Ramsch, which is applied when no player bids for the solo. This game mode punishes players who likely avoid the risk of successfully bidding for the solo with an only mediocre, but possible hand. It follows the rules for Grand, but highest score loses (no partnerships!). Due to the sometimes extraorinarily high (negative) scores, Ramsch plays may strongly distort a player's total scoring for the evening, and is therefore not officially sanctioned. Revolution (in three variants): bascially a Null in open play, but the counterplayers are allowed to exchange cards. Skat gained nation wide popularity and a major development of its mechanisms in the course of the first world war. The game as it is today is a result of constant modification and refinement by countless players in the trenches of the German Western front. The current form of bidding with ascending numbers prevailed among the players, and many inofficial variants were introduced. Though first rejected by the Skat association, a lot of the so-called "trench rules" later became officially sanctioned. The official turnament deck is a compomise that solved another dispute between the German and the International Skat Association by combining the colours of a German Suit (predominantly found in Southern and East Germany, Switzerland, Austria) with the symbols of a French Suit (predominant elsewhere in the regions where Skat is popular, foremost Northern and West Germany).