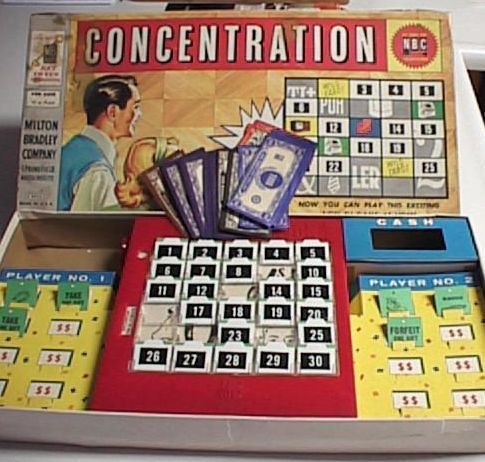 A rebus puzzle is covered by matching pairs of items. The items are covered by numbered slides. The slides are numbered one through thirty in the Milton Bradley editions and one through twenty-five in all other editions. each player or team chooses two numbered slides and reveal whatever items are beneath the slides. If the items match, then the items are removed to reveal parts of the rebus puzzle of which the team may hazard a guess. Solve the rebus puzzle and receive the value of all matching pairs possessed in play money. The side that has more money after three rebuses wins. Puzzles in the Milton Bradley and Endless Games editions were designed by the people who created them for the series: Norman Blumenthal for the former and Steve Ryan for the latter. Educational Concentration is made for classroom drills. It does not feature a rebus puzzle but it does have a plastic molded gameboard with twenty slots. The game comes with color matching, American history, American geography and homophone drills. More drills can be homemade easily. Based on the long-running television series which was inspired by the children's card game.