Would You Rather...? - Universal Statistics 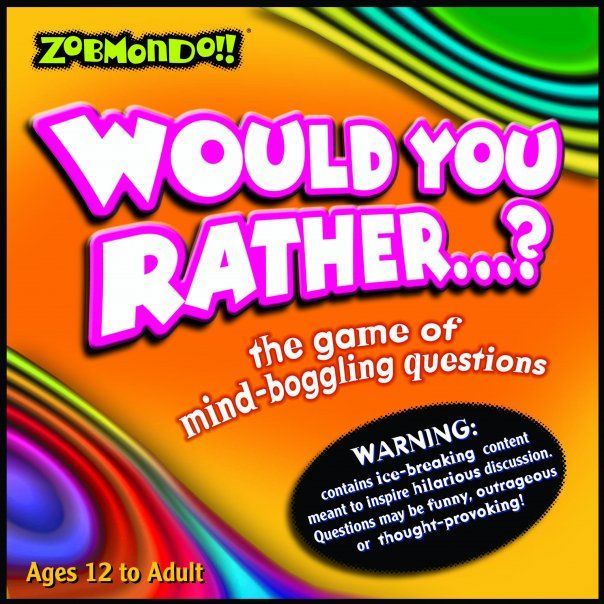 Before they can roll and move, players must pick a card and present the rest of the players with a nasty choice between two thoroughly unpleasant hypotheticals in categories such as pain, embarrassment, ethics, and ingestion. If the player guesses the majority preference, he gets to move otherwise he must pass. Some spaces allow the player to invent their own awful hypothetical choice. The other players vote secretly on their choice in this case. If the vote is not unamimous, the player can move or send someone else back. Players roll a six-sided die and there are only 10 spaces to the goal so games go very quickly. Typical choices on the cards include, "Would you rather lie naked in a bathtub full of live roaches or dive head first into a pool of tobacco spit?" The answer "neither" is NEVER allowed. Variant: The 2003 version of this game "Would You Rather?" appears to have quite different rules to the above described game. There is a new simpler square board with more spaces. Unlike the 20 minutes of the above game, 1-2 hours is recommended by the manufacturer. Players roll a dice, then move and depending where they land, draw cards with dilemmas to pose to the rest of the other players. The current player must try to secretly predict the result of the other players' subsequent open discussion and consensus view. No-one is penalised for an inability to reach consensus, the game encourages one option picked at random perhaps by flipping a coin, to keep the game moving. If the current player predicted correctly, they get a bonus turn. Typical questions include "Would you rather ... On senior prom night, have to take your parent -OR- your 12 year old sibling?" Every so often players get the opportunity to take a difficult challenge with the winner being the first person to complete their third challenge.