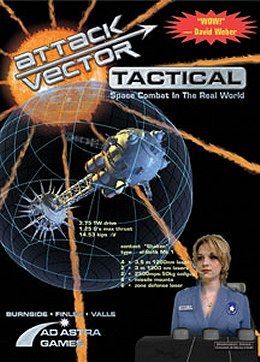 Skirmish scale (1-3 ships per player) space combat game with fast moving, highly realistic, 3-D movement and decision making mechanics. Mechanically, the game plays in segmented movements (a'la Car Wars) with 8 per turn, and runs most of the decision making in parallel. This game encourages "fly by the seat of your pants", and is more like a first person flight sim than most minis games are. You actually feel like you're doing piloting or ship handling with this game. Most of the actions you do have a delay before you can do them again. Clever use of paper clips on abaci keep the timekeeping elements fluid and simple. While there's science underlying the rules, it's carefully segregated into sidebars, so that only those people who care about it have to look at it. You don't need to be a science genius to play this game; the back of the box says "We do the scary math, so you can blow things up", and it's true, mostly due to play aid design.